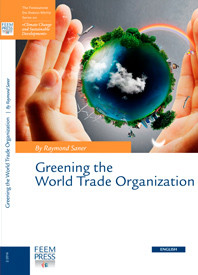 Even though the COP21 meeting in Paris concluded on a positive note, the implementation of mitigation and adaptation measures remains based on non-binding proposals and promises made by the countries who took part in COP21. In addition, the solutions discussed so far are based on the assumption and hope that new technologies will be developed that can help generate the needed abatement of Green House Gases (GHG) and that such new technology could be developed, sold and used based on “business as usual” in regard to protection of intellectual property rights (IPRs). This publication proposes instead an alternative way to halt climate warming. The author suggests that the treaty power of the WTO could be used to create the incentive system needed to transform “business as usual- IPR” to a “green oriented trade and development system” turning green high technology into a common resource that could give low-income developing countries access to green high technology goods and services which would enable them to contribute to the effort of stopping global warming at a global level. Finally, this publication proposes three green agreements within the WTO agreement framework that could generate the green investments and green production needed to successfully implement climate change mitigation and adaptation at global level and in the public interest.