Coalitions and Networks. 12 papers from 20 years of CTN workshops 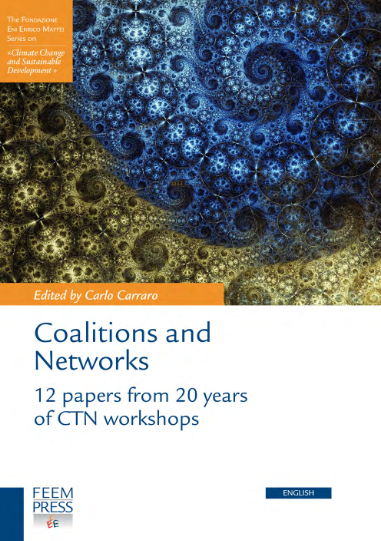 Economic development is an essential component of the life of human societies: it is crucial to provide better living conditions to present to future generations. Poverty eradication, better nutrition, access to energy, health and education are objectives almost unanimously shared by all societies, but require economic development to beachieved. Resources in our planet are however finite, and living conditions do not depend only on economic development but also on the quality of the environment. Among the threats to economic development and quality of life in this planet, climate change is certainly the most important one. But other threats, from biodiversity losses to lack of water availability, often closely interrelated with climate change, cannot be neglected when assessing the future prospect of human life on earth. This series’ goal is to provide a comprehensive and multidisciplinary approach to sustainable development and to analyze its economic, social and environmental components. FEEM’s «Climate Change and Sustainable Development» Series aims indeed at disseminating research carried out and knowledge developed within FEEM’s Climate Change and Sustainable Development program. Volumes will move from methodological tools (game theory, integrated assessment models, risk assessment tools, etc.) to economic and policy analysis of measures designed to control climate change, to offset its impacts and, more widely, to support and operationalize sustainable development.

The Coalition Theory Network (CTN) is an association of eight high-level scientific and academic institutions whose aim is the advancement and diffusion of research in the area of network theory and coalition formation. The history of CTN began in 1995, when FEEM joined CORE – University of Louvain la Neuve in organizing a workshop on coalition formation and environmental games, with focus on the analysis of the process of international climate negotiations. The success of the workshop induced the organisers to widen the focus of the following meetings to the burgeoning applications of coalition and network theory, and to undertake the formal creation of CTN. The yearly meetings have continued for 20 years, hosted in turn by the partner institutions, among which those that have joined in the meantime (GREQAM- University of Aix Marseilles, and CES – University Paris I in 1999, MOVE – Universitat Autònoma de Barcelona in 2000, Maastricht University and Vanderbilt University in 2006, and CSDSI – New Economic School in 2014). The CTN has progressively become a reference point for the study of network and coalition formation and their applications. This volume represents a tribute to research developed by the Coalition Theory Network and presented at the CTN annual workshops, on the occasion of the 20th anniversary of its foundation.